After years of calculation, planning, component production and installation the Wendelstein 7-X project is now entering a new phase: Max Planck Institute for Plasma Physics (IPP) in Greifswald in May started the preparations for operation of this the world’s largest fusion device of the stellarator type.

Assembly began in April 2005: A special grab hoisted the first of 70 more than man-sized magnet coils carefully over a just finger-wide slit onto a bizarrely shaped steel vessel. The coil, weighing six tons, and the vessel part were the first components of the Wendelstein 7-X fusion device to arrive at Greifswald from their production facilities throughout Europe. Here, more than 800 kilometres from the home institute at Garching in Bavaria, IPP had opened a second site in 1994 within the framework of a special programme “Aufbau Ost” to support the eastern part of Germany.

The two sites are pursuing the same objective: copying on earth the energy production of the sun. A fusion power plant is to produce energy from fusion of atomic nuclei. As the fusion fire does not ignite till a temperature of over 100 million degrees is attained, the fuel, viz. a low-density hydrogen plasma, ought not to come into contact with the cold walls. Confined by magnetic fields, the fuel is suspended inside a vacuum chamber almost without contact. The two types of configuration for the magnetic cage are being investigated by IPP at the two separate sites: the ASDEX Upgrade tokamak is being operated at Garching, the Wendelstein 7-X stellarator is being built at Greifswald.

The more simply designed tokamaks are still to the fore. Today only a tokamak such as the ITER international test reactor has the confidence to produce an energy-supplying plasma. “But”, states Project Head Professor Dr. Thomas Klinger, “the stellarator principle promises strengths where its fellow campaigner shows weaknesses.“ Unlike tokamaks, which work in pulsed mode, stellarators are suitable for continuous operation, by virtue of their specially configured magnetic system.

Proving this makes Wendelstein 7-X the key experiment. The structure of its magnetic field is the result of sophisticated optimisation calculations made by the Stellarator Theory division and of its more than ten years of searching for a particularly stable and thermally insulating magnetic cage. Professor Klinger states: “Wendelstein 7-X is expected to put, for the first time, the quality of its plasma equilibrium and confinement on an equal footing with those of a tokamak. The experiment is to show that stellarators are also suitable for power plants.” And with discharges lasting 30 minutes, it is to demonstrate its essential superiority, viz. continuous operation. This does not require Wendelstein 7-X to produce energy: Many properties of an ignited plasma can be transferred to stellarators from the ITER tokamak.

The device comprises five almost identical modules preinstalled and assembled in a circle in the experimentation hall: 70 superconducting coils strung along a steel plasma vessel are enclosed in a ring-shaped shell. In their vacuum-pumped interior the magnets are later cooled with liquid helium to superconduction temperature at nearly absolute zero. They then need hardly any energy. Besides the major components, miles of cooling ducts, current leads, measuring cables, numerous observation ports and sensors were installed, always in conjunction with control measurements and tightness testing of the many thousands of brazing seams.

“The industrial production and assembly were already an experiment in itself”, states Professor Klinger, “a task that we at first underestimated: The superconduction technology coupled with the elaborate geometry of the components presented us with exacting quality requirements.” In fact, construction did not take six years as planned, but nine years. Design and production, measurement and calculation – the complex shaping called for new methods that had first to be developed by the institute and industry during construction. A new basis plan was therefore drawn up in 2007. Since then assembly of Wendelstein 7-X is within schedule and the budget plan, and since 2009 – as first research project in Germany – it is even certified in accordance with industry standard ISO 9001.

Companies from the whole of Europe produced the components for Wendelstein 7-X. The investment costs met by the Federal Government, the State of Mecklenburg-Western Pomerania and the EU came to 370 million euros. Contracts worth more than 80 million were awarded to regional companies. Numerous research facilities at home and abroad were involved in construction of the device: Within the framework of Helmholtz Association Karlsruhe Institute of Technology was responsible for the entire microwave plasma heating, Jülich Research Centre built diagnostics and produced the elaborate connections of the superconducting magnet coils. Installation of these required 160 person-years of work time by superconduction technology specialists from the Polish Academy of Sciences in Krakow. The US fusion institutes at Princeton, Oak Ridge and Los Alamos made contributions that included auxiliary coils and measuring instruments worth 7.5 million dollars for equipping Wendelstein 7-X.

At the beginning of May the shell of the device was closed and the first pumps started up. The  inauguration ceremony on 20 May 2014 will mark entry into the next work phase, viz. preparation of operation. This will involve testing all technical systems: the vacuum in the vessels, the cooling system, the superconducting coils and the magnetic field produced by them. Professor Klinger: “If all goes well, we can produce the first plasma in about a year.” 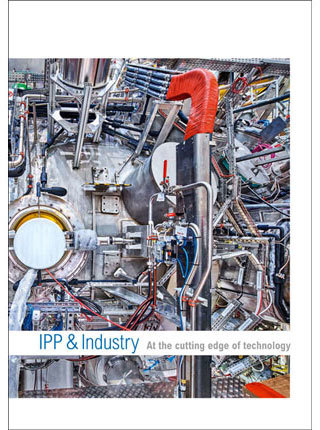