The scientific preparations for the Wendelstein 7-X fusion device began at IPP Garching in 1980. The main assembly at IPP Greifswald was concluded in 2014. The first plasma was produced in December 2015.

18 June 2021 The very last of the 120 water-cooled divertor plates has been installed in the plasma vessel. Assembly of the remaining vessel installations is expected to be completed in December.

July 2017 Magnet coils have been cooled to superconducting temperature, next operation phase scheduled for autumn 2017

May 2017 Installation work in the plasma vessel completed, vessel closed

February 2015 Cooling tests of the superconducting coils and the cryostat, a process lasting several weeks, has startet. [more]

May 2014 The cryostat is closed, commissioning has started, [more]

May 2013 The last open seam on the steel outer cover of the Wendelstein 7-X fusion device is closed. The core of the research device is ready. [more]

November 2012 All connections of the superconducting coils are fixed. Construction of the periphery and work inside the plasma vessel has started.

December 2011 All five modules are placed in their final position on the machine foundation. This completes the base machine. [more]

September 2008 Transport of the first magnet module for final assembly

May 2007 Fabrication of the 299 vessel ports completed

January 2007 First sector of the support and vault structure delivered

1998 till 2001 Preparations for production of superconducting coils

19 July 1994 Founding of the Greifswald Branch Institute of IPP 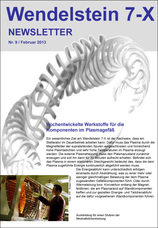 Information on current developments of the Wendelstein 7-X experiment