The ASDEX Upgrade tokamak went into operation in 1991. Since then it has been working on the principles for planning and operating the ITER test reactor and is preparing for a follow-up demonstration power plant.

2019 A method for avoiding current disruptions was successfully demonstrated.

2018 The world's most powerful microwave heating on a tokamak started operation at ASDEX Upgrade.

2016 Plasma current driven completely without transformer – for the first time in a machine with an all-metal inside wall, [more]

2014 Divertor manipulator installed, to replace parts of the lower divertor in between two plasma discharges.

2012 World record in power exhaust with moderate thermal load on the divertor plates, achieved by means of a sophisticated control system, [more]

2007 Last carbon tile replaced. Experiments are starting in the world's first and only device with a wall completely clad with tungsten, [more]

2004 "Improved H-regime": A plasma state with very favourable properties, new device record of 1.5 megajoule for the energy content of the plasma, [more]

2002 "Europeanisation": ASDEX Upgrade was opened to use by fusion laboratories from all over Europe, [more]

1996 Pioneering work: The first parts of the wall – formerly covered completely with carbon tiles – were coated with tungsten. Proven: High-quality plasmas and tungsten as wall material are compatible with each other in a divertor tokamak.

1993 Pellet centrifuge put into operation. To replenish the plasma little cubes of frozen hydrogen are injected.

1981 Planning of ASDEX Upgrade initiated. A team of about 25 physicists and engineers to design the research facility. 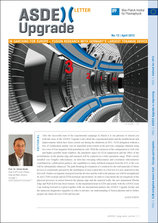